There was €17,000 up for grabs as the final of the Larry O’Rourke National Produce Stakes took centre stage at Clonmel Greyhound Stadium last night and despite Swords Rex coming into the decider as a 1/3 shot to land glory, it was Gaston Pecas who capped off a brilliant weekend for trainer Pat Buckley.

Explosive Boy set a pretty high bar in 2021 but it's fair to say that the 2022 renewal of the prestigious National Produce Stakes certainly hasn’t failed to live up to expectations. Swords Rex lit up the competition with a series of incredible displays which have seen him dip under the 28-second barrier but it was the biggest finisher in the finale, Gaston Pecas, who delivered the goods with a terrific display for Javier Jarne and Pat Buckley. 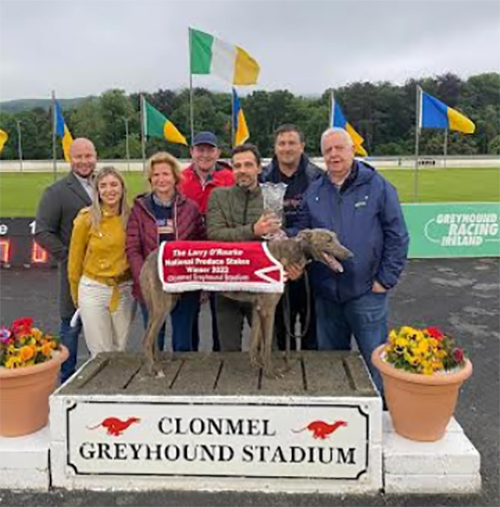 In a race which was packed to the gills with explosive early pacers, 2/5 chance Swords Rex was pitched in between the likes of Newinn Homer and Sunshine Dream and a fast start was essential in his pursuit of back-to-back classics. However, after missing the kick by usual high standards, Swords Rex found himself the meat in the sandwich at traprise between both Newinn Homer and Sunshine Dream. In turn, this allowed Serene Tiger to display blistering early gears from trap five and Michael O’Donovan’s charge was to lead the field into the opening corner.  Meanwhile, Gaston Pecas was railing nicely from trap one and with impending trouble on the horizon for many of the finalists, Javier Jarne’s staying powerhouse was on the verge of turning with a very nice pitch in second.

As Serene Tiger skipped clear around the opener, the likes of Swords Rex and Radical Hero were badly hampered at this point and this ultimately ended their chances of landing the silverware. Gaston Pecas meanwhile maneuvered into second down the back and despite having two lengths to bridge on Serene Tiger, who was setting a scorching gallop, patrons were already assured of a thrilling finish. Stopping the third bend sectional clock at a fizzing 16.00 flat, Serene Tiger continued to set the tone as Gaston Pecas gave chase and it wasn’t until the final bend where the latter started to rev his engine and eat into the lead. Delivering an explosive display of finishing power, Gaston Pecas, a son of Droopys Sydney and Bobsleigh Jet, stormed to the front in the closing stages to soar past the gallant Serene Tiger and land the spoils. A terrific finish to what has been another incredible Produce Stakes, the time was 28.36 as Gaston Pecas crossed the line with half a length to spare. Serene Tiger ran out of his skin to take second and no doubt Michael O’Donovan’s charge will be an ever-present in the coming months in the major events, while the likes of Newinn Homer, Sunshine Dream and Radical Dream are sure to excel given the early speed they possess. Swords Rex, meanwhile, despite being luckless on the night, remains at the top of the tree on these shores and he will have the Irish Derby in his sights come late September. That said, congratulations are extended to connections of Gaston Pecas, a very worthy winner of the 2022 Larry O’Rourke National Produce Stakes.

ROUNDING UP THE FINALS

The final of the Kieran Purcell Snr Memorial Guys & Dolls A3 525 was the main supporting stake on the card and Courty Girl justified her tag as the one to beat as she took home the €2,100 winner’s purse.

Owned by John Meelam and trained by John Byrne, Courty Girl held the mantle of the fastest in the stake with a terrific 28.57 opening round performance and she was paw perfect last night again with a very powerful performance. Out like a light from trap five, the daughter of Laughil Blake and Killaheen Queen rocketed to the turn and she carried a lead of a length and a half into the back straight from Bloodsweatnbeers in second. However, pressing home her advantage at the penultimate turn, Courty Girl stayed on gamely up the home straight as she saw off the late challenge of Abigails Power in second. Three lengths separating the duo, the time was a fantastic 28.60.

The opening final on the card was the Slaneyside Greyhound Supplies A5/A6 525 and this went the way of 3/1 shot Shancol James as he built on his fine display the week prior to take home the €875 first prize.

Running from trap one, the Adam Dunford-trained tracker was led early on by the fast-starting Slaneyside Steve but despite shipping an early bump, Shancol James recovered well to reel in the early leader. Storming to the front at the penultimate corner, the son of Eden The Kid and Knocknaboul Rose, owned by PJ and Charles Sugrue, drew clear of his rivals in the closing stages to cross the line seven lengths clear of Dream Step in second. The time was 29.05.

There was €1,000 up for grabs in race two as the final of the Run Happy @ Stud A3/A4 550 took centre stage and Lough Mistoki made every post a winner as the August 20’ whelp scored a first career victory.

Owned by Jack Molloy, Lough Mistoki was swiftly into stride wearing the striped jacket and he quickly paced up to dictate proceedings. In charge throughout, the son of Droopys Buick and Pipette, a 5/2 chance, was very game out in front as he came home two lengths clear of the fast-finishing Greenane Camino in second. The time was 30.22.

There was €1,100 up for grabs in the final of the Extreme Greyhound Products A1/A2 550 and it was Classic Chick who finished at speed to land the spoils.

Dromana Fury led early from trap four but a very troublesome opening corner saw several runners bumped out of contention, one of which was the favourite Annagh Bailey. The lead was to change at numerous occasions during the contest as both Glenbervie Maza and Newinn Extra disputed at different points, however, in the end it was Trevor Power’s Classic Chick who showed big speed down the back to take control. The daughter of Droopys Buick and Classic Quest finished at a rate of knots thereafter as the Jimmy Powers-trained bitch crossed the line with three lengths in hand over Stickman, who also ran a fine race in second. The time for the 2/1 chance was 30.15.

Carefree King came into the Trap 1 Greyhound Supplies Unraced 525 fresh from a brilliant 28.32 display but it was Good Axel who upset the apple cart as he landed the €1,500 winner’s prize in trap to line fashion.

Good Axel landed his opening round assignment in a smart 28.75 but after being turned over by Move Over Cha last time out, and Carefree King producing the performance he did, Good Axel looked to have plenty on his plate if he was to turn the tables. However, Maria Kennedy’s 5/2 chance meant business from the off as he broke in front from the stripes to lead Murlens Brae early on. Drawing clear down the back, Good Axel proved a different gravy on the night that mattered as the son of Good News and Drifting Abby set a brilliant gallop to come home six and a half lengths clear of Murlens Brae in second. The time was a brisk 28.76.

Despite missing out on the big one, Graham Holland did land the final of the €1,500 to the winner Track Bookmakers Open 575 as Cryptopunk made every yard of the running.

Owned by Simon Taylor, Cryptopunk has really found his trapping boots in recent weeks and last night capped off a hat-trick of wins for the June whelp. Rocketing from trap three, the son of Dorotas Woo Hoo and Bogger Bonnie relished the long run to the opening corner and he rounded the turn with daylight in hand over his nearest rival, Rapid Jack, in second. Setting a smashing gallop down the back, Cryptopunk was never going to be caught as he galloped majestically into the bottom two corners. Crossing the line with two and a half lengths to spare over Rapid Jack in second, the time was a red-hot 31.34.

Race three saw the first open contest of the night come to fruition as the Sporting Press Online Edition Open 300 got underway.

Seomra Nate chased home the record-breaking Flashing Willow on his last outing at Tralee but the 5/2 shot went one better for trainer Chris Houlihan as he produced a masterclass of sprinting. Owned by Patrick J O’Connell, Seomra Nate flashed from trap four and he displayed immediate acceleration to outpace his rivals early doors. Tracking expertly thereafter, the son of Definate Opinion and Ballymac Razzler stayed on strongly to cross the line two lengths clear of Rising Castle in second. The time was a slick 16.05.

BOY EXPLODES BACK TO WINNING WAYS

Aside from the top-class showpiece event, there was plenty of interest surrounding last year’s Produce Stake winner and current greyhound of the year, Explosive Boy, as he went to traps in the Split The Pot Open 550.

Trained by Pat Guilfoyle for Peter Sutcliffe, Explosive Boy is a real crowd pleaser and despite making his first start since the start of April, he showed little signs of rust as he galloped to a comfortable victory. Running from trap three, Explosive Boy broke well and immediately showed his trademark early dash to outpace his rivals to the opening turn. Chased in second by Swords Maestro, Explosive Boy set a scorching gallop down the back straight and he had four lengths in hand come the penultimate turn. The son of Good News and Delightful Girl is now a very stout stayer and he never gave his followers a moment's worry in closing stages as he stayed on expertly to see off Swords Maestro by three and a half lengths. The time was a rapid 29.65.

The concluding race on the card was landed by Patient Crusader who held off Tommy Too Many to score a fourth career success.

Jointly owned by Kevin O’Brien and Tommy Caffrey, Patient Crusader hadn’t tasted victory since March but a fast start put him in the driving seat from trap three. Taking control at the opening turn, the son of Droopys Buick and Coolavanny Pearl displayed fine determination thereafter as despite Tommy Too Many presenting a strong challenge, Patient Crusader stuck to his guns well to score by one length. The time was 30.01.